It was a capacity crowd at Kirby's Knife | Fork | Book on November 28, 2019 for the Toronto launch of Resisting Canada: An Anthology of Poetry edited by Nyla Matuk. Kirby started things off by reading a statement from Signal Editions editor Carmine Starnino, who was unable to attend. Kirby was followed by Nyla Matuk who talked about the book and then introduced the readers. 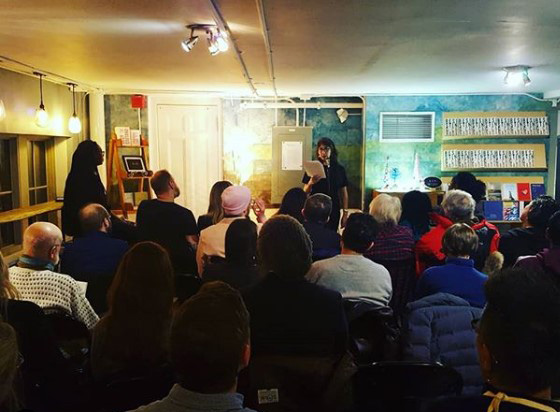 A few words from Carmine Starnino:
I feel terrible for not joining you all to celebrate a book that I consider a highwater mark of my time at Véhicule as poetry editor. The seeds for this anthology were planted four years ago, in 2015, after Collen Fulton, a poet and academic now teaching at Concordia, released a report on the make-up of Canadian poetry juries. Fulton’s findings showed that the odds of winning a prize as a person of colour were very limited. It depressed the hell out of me. I realized that something about our system, and my place in it, was broken. Fulton’s report prompted calls on social media for jury diversification, but I realized that changing the power structures which underpin what happens in Canadian poetry—and who it happens to—also required raising tough questions about what we, as a community, valued. This was a conversation that had to be to be sparked by many voices, and it needed to go much farther, and cut more deeply, than an essay or a panel discussion. After talking to Simon Dardick, we envisioned an anthology of poets who would be chosen for their strengths and reputations around engaging questions of cultural belonging, environmental values, and racial privilege. I’m grateful to Sonnet L’Abbé for early conversations that helped us think through these issues and I’m especially grateful to Nyla Matuk for making this idea her own, and creating something bold, combative and marked by moral purpose. I believe anthologies can be vehicles for disruptive ideas and believe that Resisting Canada will make its own powerful claim on the scene for many years to come.

Introductory remarks from Nyla Matuk:
In a 2017 issue of the UK journal The Poetry Review, the Jamaican UK-based poet Kei Miller wrote, “this being the time of manifestos, here is mine: that poetry, at its best, does not speak on behalf of the self. It speaks on behalf of the Other. It speaks on behalf of community. It speaks the self only insofar as the self is part of something larger.”
I think it’s easy to disagree with this manifesto—to stake a claim for poetry against collectivity and shared consciousness. And it’s easy to disagree because of the legacy of the European Romantics in Western culture, who put forward an idea of the poet or the artist as a lone genius, a god-like special being, often isolated, illuminating the world for us with a singular vision. But Miller’s declaration bears a resemblance to a number of ideas I encountered as I prepared and edited Resisting Canada. The legacy of an egotistical sublime of the English Romantics – “on behalf of self” poems and confessional poetry, which narrate an individual, seemed at odds with the words of resistance I was collecting; it was poetry with a view to shared memory, consciousness-raising, and politics not necessarily exclusively of identity and identity’s fraught subjective realities, but telling “history from below.”
I see the book not so much articulating a position on a set of issues, but rather as various understandings of positions and identities as they might react to a framework such as the settler-colony that is the Canadian state. The idea was to really point at the ruling class-whether that is manifest as the current neo-liberal government, the ongoing implementation of settler-colonization, or inequality and racism. It’s less about individual political identity and it’s certainly not about being victims.
And, I think we have to bear in mind, as well, that Kei Miller’s “something larger” hints at a writer’s political agency. It need not always circumscribe blatant resistance. It may be about insisting on existing, on belonging, or not going away.
My hope is that this book’s contents will help with a deeper understanding of the unfolding history of wrongs perpetrated onto people by the Canadian state. It seems to me that understanding history is the most important work of resistance. Every unfolding situation of injustice I see in the news and on social media is attached to what came before, and until people see the trajectory, pattern and roots of the injustice, they won’t fully understand the explosive present or a path to justice. The political underpinnings of this book are about a move away from the idea of insisting on subjective identity, and toward finding the root of the injustice which usually turns on actions of the state, on decisions made in pursuit of powerful interest groups, money and economic growth, or imperialism at the expense of human rights. So what I am saying is that the political, which is personal, still needs to stop being only personal.
And as far as the state goes? Maybe it’s time to be thinking beyond the state, and beyond the status quo and apparatus of the state. Social and political movements committed to economic justice, racial justice, gender justice, and ecological justice have to imagine it, and do away with legal trappings like the “Indian Act,” which is still in place, an instrument of settler-colonial statecraft that has allowed injustice to continue. There are countless examples of the law being created and then manipulated politically. Think of apartheid. Think of Colten Boushie. Resistance with poetry is one way to imagine a way out.
I am grateful to all the contributors to this anthology: to Carmine Starnino, Simon Dardick, Nancy Marrelli, and everyone else at Véhicule Press, for all the hard work and help in getting it from manuscript to finished product. I’d also like to thank the Canada Council’s New Chapter Fund for the awarding the grant that made the publication of this book possible.