Not to Imply Anything 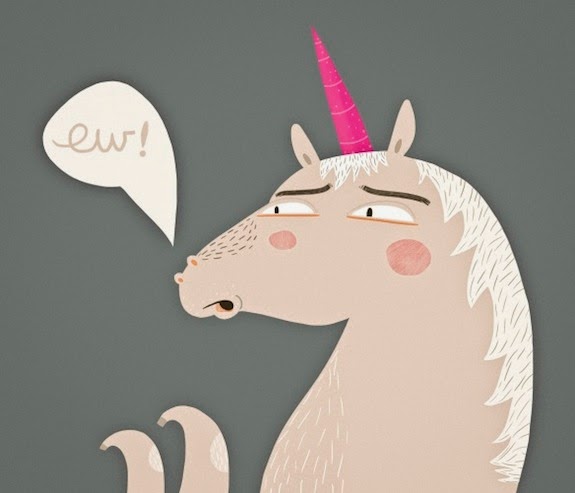 Yesterday, my poem "Reviewing a Unicorn" appeared on the Lemon Hound website. Not too long after, Natalie Zina Walschots—for brevity’s sake, I’ll go with her nom de guerre, "Natalie Zed"—Tweeted about it:

Not to imply anything, but Guriel's poem http://t.co/sUehClhp2x talks about criticism rather a lot like I did: http://t.co/i2eOXqp4Ry
— Star Lord (@NatalieZed) November 17, 2014


Not to imply that Zed is accusing me of plagiarism, but she does seem to want to draw a comparison between my poem (which uses surgery on a unicorn as a metaphor for criticism) and some of her prose (which also uses a surgical metaphor, though no unicorn). It looks like Zed’s paragraph was posted to the CWILA site on June 12, 2013.

Not to imply that Zed deserves exhibits A through Z—but for the record: I submitted "Reviewing a Unicorn" by email to Paul Muldoon at The New Yorker and Michael Lista at The Walrus, in December 2012, well before Zed's post. (Alas, the poem was rejected by both magazines; I have the email threads.) I also made mention of a poem about sawing the horn off a unicorn in an interview for the Fall 2012 issue of The New Quarterly, which appeared online in January 2013—again, well before Zed’s post.

Not to imply that Zed’s prose is banal, but more troubling than a Tweet that doesn't quite have the nerve to commit to its accusation is the suggestion that I would steal from a short paragraph that:
Moreover, a cumbersome sentence like this—“She gives every piece of writing that she explores the dignity of thorough and intelligent examination, pays it the compliment of picking it apart, confidence [sic?] that regardless of blood loss it will survive the procedure”—somehow leaves Natalie Zed’s reader feeling less than confident about Zed’s command of grammar and just what exactly the author means by "it."

(Illustration by Sarah Goodreau)
Posted by Carmine Starnino at 15:01

Not to imply that people can't have their own idiosyncrasies, affectations, vulnerabilities in the category of hipness, antediluvian sensibilities and so on where language is concerned, but it is a Fantastical Moment of Zen that the particular Author here, or perchance his Editor, capitalizes "Tweet".

As ever, sirs, in acknowledgement of your acquaintance,

I am just pleased to see Guriel respond to what amounts to an allegation (passive aggressive as it was) of plagiarism, a charge writers often and should take very seriously.

Saying something defamatory on Twitter (many style guides insist on the capitalization of both "Tweet" and "Twitter" which is what Twitter, itself a proper noun, and a brand like Lysol, requests) is still saying it. In this case, the accusation was made in a "just sayin'" kind of way, making it childish, as well as, it appears, false.

Style guides, of course, are the height of cool, and one can never go wrong implementing exactly what they suggest, nay, insist -- in fact, I often insist on it myself -- especially when using technology such as E-mails and Websites.

Dear friend, thanks for putting me in my place. Now give me my horn back.

I think the record shows I was not the one who raised the proper capitalization
issue, on this "Website" of technology.
But I see your point now; It may not be wrong to capitalize Twitter, it's just not "cool" to capitalize Twitter.
Having nothing else, you went with it---while insinuating that all critiques of you are oppression---the equivalent of butchering a unicorn. Personally I think a unicorn who bothers to criticize the capitalization of Twitter on a post refuting an allegation of plagiarism is fair game.

It's a pity that Mr Guriel chose to defend his work so ungraciously. The core of his defense sounds legitimate, but everything in his execution is off-putting.

Considering the accusation, Mr Guriel's reply was gracious, witty and contrasted with the tone and content of the accusation he faced. Also it's a forthright response to a snide accusation and he backs up assertions.

Now this is becoming confusing. I haven't noticed anyone critiquing me, and if they did, I would probably be charmed, unless the person was much more powerful and owned tanks, in which case, yes, perhaps oppression.

But in the meantime, can we all agree on one fact, at least, since we disagree so excitingly on the components of grace, wit, and even contrast?

There were no unicorns reviewed in any of the above performances, including Z's blurb and G's paean.

To repeat -- number of unicorns harmed, or even making an on-screen appearance so far: 0.

Poem, I meant. Slip of the peon.

We're going to talk "bothers," in this context?

I'm still offended that someone compared Wieseltier's pompous hotchpot of an essay in The New Republic to Areopagitica.

Talk about Wiesel words. The old sod couldn't argue his way out of a group therapy session.

Friends, I have detected a lull in negativity, and I'm simply not having it.

But to the points:

First, Lemon Hound is misspelling the title of Guriel's book, and no one has pointed it out. "Satsifying" [Clicking Sound], although a satisfying sound reminding me of satsumas, among other things, is not a word, nor is it Guriel's title, any more than "Unedifying Clunking Sound" or the other suggestions that have been made behind closed doors.

Second, I own both a cleaver and a scalpel for reasons I will not go into here. As an experiment, I tried "wielding" each as the other – though not on a live subject, I hasten to add.

I concluded there is no sensible way to use a cleaver in any scalpel-like sense. They are polarities within the genus 'blades'.

The only exception, as far as I could tell, is that one can use each in an expert manner. But then, equally, one might wield a cleaver "/... the way an Indy500 driver does / a racecar..."

Given that none of us has money enough nor time (except me, apparently), why not say, "He's good with a cleaver"?

This brings me to Carmine Starnino's elegant defensive posture, written elsewhere in twitterlight. CS (as I call him, since his is an intellect comparable to C.S. Lewis, among many others) says critics are missing the point.

"The poem satirizes itself” – CS.

As an indictment of the horse-ness of the unicorn that is the outrageously important cultural item, Guriel employs his widely reputed wit to produce a donkey of an image. The inelegance of the work is the point, Dumbo.

Irrelephantly: I largely like Guriel's writings, and even have a soft spot for this song, although I imagine it fares better performed on-stage rather than when exposing itself against a white blanket.

CS’s theory flips & floors other stumping elements, such as the fact that we never meet a unicorn, despite the promise, on the page and in interviews meticulously catalogued above, that this is a poem about cutting the horn off one.

Never have I seen Guriel plug a poem about pulling a mashed-paper prosthesis off a horse's head. (As an academic point of interest to nobody, I would be more drawn in by such a promise than by the one made.)

Also, and this part is not suitable for children...

The horse tilts its head gratefully at the man (possibly but not essentially M. Lista) for removing the spike stuck to its head. In fact, the horse ‘licks’ the man, which JG anthropomorphizes somewhat.

Have we all forgotten the beginning of the poem? Lista (if that is his name) has hacked loose a hoof and broken off a haunch. The horse is laid out among apples, apparently for eating.

In this situation, the horse is most likely writhing in pain. And the mob, if sympathetic to animals, will be greatly disturbed by the squeals of distress, not the final act of pulling away its hat. They need not be vegetarians. They may simply disapprove of attempting to eat a large mammal while it is still alive.

Since we are playing judo, all this confusion must be intentional. Guriel is offering up his poem, like a live horse, for the dinner table. Lista has been invited, as it were, along with the mob and Guriel's many fans, to dine on this horse, or conduct surgery upon it, or whatever we please.

The poem offers us a moral choice. Do we save the horse or don't we?

Personally, I'm for eating it.

But I would like to hear other opinions from people I respect, such as all of you who have read this far.

The Toronto District School Board.

*scratches at ground with hoof*

You do realize that reading this far down the comment thread voids your moral right to roll your eyes and tell everyone to stop wasting their time, don't you?

Moreover, a cumbersome sentence like this—“Not to imply that Zed’s prose is banal, but more troubling than a Tweet that doesn't quite have the nerve to commit to its accusation is the suggestion that I would steal from a short paragraph that”—somehow leaves Guriel’s reader feeling less than confident about his command of grammar and just what exactly the author means by "that."

Not to imply that Guriel’s prose is banal, but more troubling than a Tweet that doesn't quite have the nerve to commit to its accusation is the pretentious tone of a short blog post that:

ARE YOU NOT ENTERTAINED?

-Every Horse + Every Unicorn

What a nice little waste of time. Jersey Shores with wit.

-Every Horse + Every Unicorn =

⊂Horses > ⊂Unicorns (If not working with a bloated or Meinongian ontology)

So much for the naysayers.

At some risk of being trivial, I want to remind my anonymous friends that the symbol some lazy critics refer to as the upside-down A (∀) is, in fact, much truer to the orientation of the original letter/symbol, Aleph.

Aleph was an ox. With two horns.

The anonymous mathematician above has proven, succinctly, the long-sought answer to the question of the difference between poetry of quality and poetry of quantity.

I suggest we all copy it.